AVOCAB is one of the largest manufacturer of variety of cables and an established name in India as well as abroad. AVOCAB Wires and Cables are most preferred with numerous installations throughout the country. The range of products includes Power Cables, High tension cables XLPE , LT XLPE And PVC Cables, Instrumentation Cables, House wires and Flexibles. AVOCAB High Tension  Cables up to 33 KV are manufactured at its modern manufacturing set up at Chattral. Technological up gradation and Polymer revolution has Replaced the conventional paper insulated cables and thermoplastic insulated cables with cross linked Polyethelene (XLPE) having Better electrical, mechanical and thermal properties with reduced cable weight and dimensions. Worldwide acceptable trends are adopted by AVOCAB’S aim is to manufacture cables of highest quality and to provide customer satisfaction that is unparalleled in the industry. 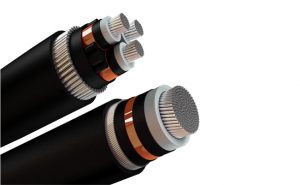 A) Temperature of conductor just prior to short circuit

Short Circuit current rating at different duration may be calculated as
Ish ( for t duration ) = Ish ( for 1 sec .) /t
Ish for 1 Sec .Duration is given in relevant tables in KA
t = Time duration required tobe calculated of short circuit in sec.

Above voltage drops (volts/km/amps) shall be multiplied with rated current & length of cable in K.M to calculated total voltage drops in particular length and size cables.